This meant that all competitors were members of BWL, that results would have BWL ratification, and that all official rules and regulations were implemented.

Rewarding achievements: The vast majority of entrants achieved Personal Bests and we judged one British Record and one European qualifying total.

Automatically, all entrants gained a place in the British rankings.

Ilze Ojere claimed a new British record for a Total of 143Kg and a Clean&Jerk of 80Kg in her Under 17 weight class! An truly outstanding performance!

Premyslaw Kowalczyk (known to all as Shamek) demonstrated his raw power to claim a Masters European qualifying total and went straight to the top of the British Masters Rankings with a 215Kg Total.

As usual, this annual event was organised at the National Sports Centre in Crystal Palace on Sat 16th June. We had one Club entry with James David (U17) who represented the Borough of Enfield.

James rose to the occasion with 6 good lifts to improve his Personal Bests in both the Snatch - 65kg and Clean & Jerk - 80kg to claim 7th place out of all 33 London Boroughs, an impressive result and reward for his consistent and dedicated training.

Thanks to Coach Adam for supporting James towards this high standard youth performance.

Saturday 9th June was our 15th Benchmark Club only competition and it was certainly the best one so far!

Best in terms of turn-out with 16 competing lifters, best in terms of performances with everyone achieving at least one Personal Best, best in terms of equipment, and best in terms of enthusiastic support.
The event was a chance to utilise our new 4x4m Competition Platform and our new Eleiko Competition discs. This helped to give all the lifters a chance to feel what it the conditions are like when they move forward on to Regional competitions, and provide the conducive atmosphere to achieve their best possible performances. Of particular note was Alexandra’s total of 132kgs which equates to a qualifying total into the British Championships, Kyran’s (U20) Clean & Jerk of 101kgs his first time through the 100kg barrier! and Connor’s Sinclair total of 262 points.
Well done to all, and special thanks to loaders, officials and helpers for a smoothly run event. 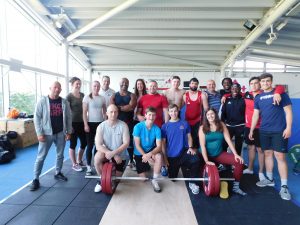 Two of our promising Youths qualified for the BWL British Youth Championships held at Luton, at the beginning of February.

Owen Millard competed in the U17-69Kg category and faced stiff opposition from lads that were mostly one year older than himself. Undaunted, Owen rose to the occasion and produced an outstanding 6 out of 6 good lifts to create new Personal Bests in both Snatch 65Kg and Clean& Jerk 85Kg, to total 150Kg. Coach Adam stated that ‘at a bodyweight of 65Kg this was a significant achievement and bodes well for a medallist position next year’. 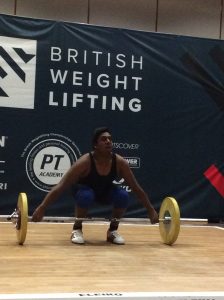 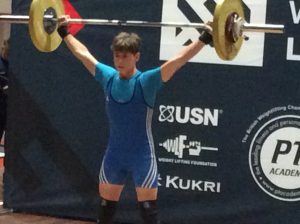 The London Borough of Enfield asked us to field a representative competitor on July 9th at Crystal Palace.

James David (U15) had the right qualifications and was keen to grasp the opportunity.

Most of the other youth competitors were older than James but this did not worry him and he dealt with the pressure with great composure and determination.

James has been training regularly with dedication and focus, which is paying off:

He achieved 5 out of 6 good lifts, managed a Personal best of 56 Kgs Snatch and a 65Kgs Clean & Jerk (narrowly missing 70Kgs) to total 121Kgs – by far the best he has ever done in competition – well done. 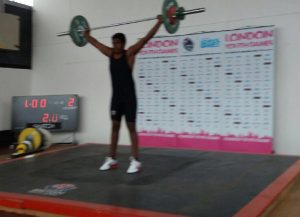 This was the first BM comps for 2017 and resulted in a mass of Personal Bests for a number of our novice senior lifters and youths. We were also pleased to have competitors from Sir George Monoux College (U20 Ammar W and Andrew E) who have been training and coached by Adam Warwicker as part of our joint Satellite Club operation.
Andrew showed competence with 6 out of 6 good lifts to total 148Kgs
and a lighter bodyweight Ammar achieved 120Kgs.
U15 James D progressed to a 116Kg total as a result of consistent training and dedication.
New senior members Laura R and Anna P both demonstrated composure, proficiency, and competitive spirit.
U13 Josh F improved his total to 61Kgs as he gears his training towards the weight demands of up and coming U15 competitions.
Thanks to our helpers and supporters on the day, especially Chris Parr.

Saturday 27th of February 2016 was the day of the Cybex British Age Group Championships held at the Phoenix Theatre in Castleford, North Yorkshire.

An amazing day it was! NLWLC took 5 young, aspiring lifters along to compete. By the end of an exhaustive day NLWLC took home 3 Championship Title Holders (Gold Medallists) and 2 runner’s up (Silver Medallists).

James (Gold/British Champion title holder) - Year 8 - 69kg Class - Best Snatch 34kg - Best Clean & Jerk 43kg - with a total of 217kg lifted between all lifts - plus a total of 60 points for technique giving a total score of 277. James achieved 6 out of 6 lifts and received a perfect score of 8 points on his final Clean & Jerk, raising the crowd to their feet in celebration!

Izem (Gold/British Champion title holder) - U13 - 63kg Class - Best Snatch 27kg - Best Clean & Jerk 30kg - with a total of 105kg lifted between all lifts - plus a total of 44 points for technique giving a total score of 149. Izem made 3 out of 3 Snatch, lifting 23kg, 25kg, then 27kg, but experienced technical issues during the Jerk phase of the Clean & Jerk only making 1 out of 3 lifts. Still gaining valuable points on good Clean technique still managed to take home the gold!

Owen (Silver Medal) - U13 - 56kg Class (weighed in at 51.80) - Best Snatch 33kg - Best Clean & Jerk 45kg - Total 78kg - Sinclair 129.681. Owen lifted consecutively on all 3 snatches, this can be very fatiguing as you only have a 2 minute rest between lifts, Owen still managed his first two lifts and got 35kg over his head on his final attempt of the Snatch but dropped it on his way out. Owen also managed a very easy 47kg and 50kg Clean and what looked like a very good Jerk but the judges gave him 2 out of 3 red lights most likely due to impingement (slight bend) of the elbow during the Jerk.

Kyran (Silver Medal) - U15 - 69kg Class - Best Snatch 55kg - Best Clean & Jerk 66kg - Total 121kg - Sinclair 174.197. Kyran unfortunately weighed in 0.4kg overweight for the 62kg class, which was his elected class that would have guaranteed him a gold medal. Instead Kyran lifted with those 6kg heavier than himself but still fought well to take home a silver medal. Kyran eased a 55kg Snatch and feeling the pressure of the C&J, Power Cleaned 66kg before a Split Jerk. Kyran's final attempt was 70kg easing the Clean again but he just buckled under the weight of the 70kg Jerk.

I would like to give a special thanks to the parents and supporters of the Club, this couldn't have been done without you! You gave these extremely gifted kids sensational support during their journey to this National Level Competition. As NLWLC Head Coach I give my full support and resources to developing these athletes and it makes me very proud to have been given this opportunity! 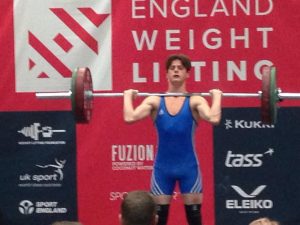 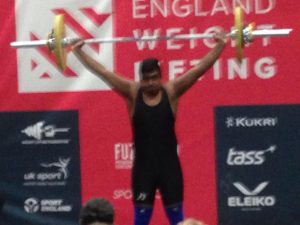 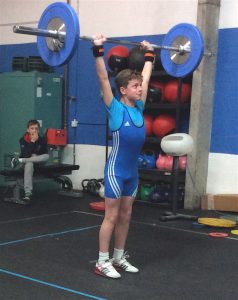 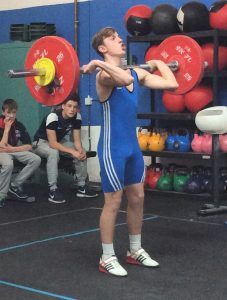 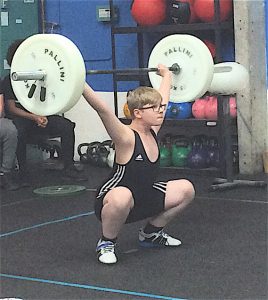 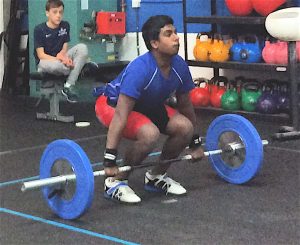 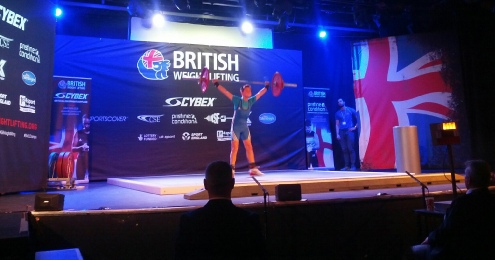 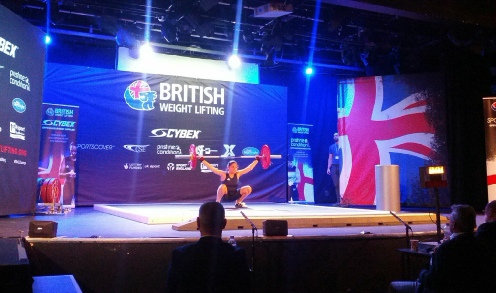 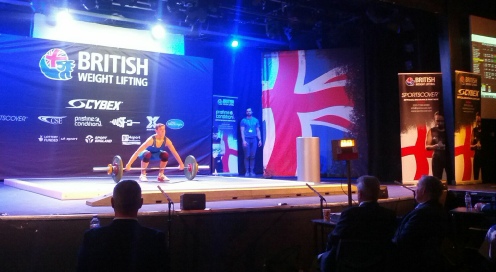 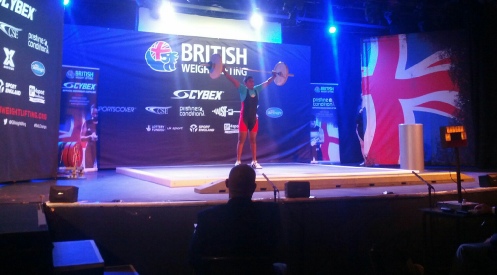 The Club entered 4 of our aspiring Youth lifters.

Izem undaunted, found herself included in a group of older and more advanced lifters, however she rose to the occasion with Personal Bests
in both lifts, with a Snatch of 27kgs and a Clean & Jerk of 35Kgs, she deserved the resounding applause.

James hoisted a new PB with a Snatch of 33kgs.

Owen heaved a new PB in the Clean & Jerk of 47Kgs and earned himself a second place medal. Kyran posted a tremendous 50Kg Snatch to help total a PB of 115Kg, and also was awarded a second place medal. These splendid results have been the product of dedicated training and commitment, well done. Thanks to the parents for their support. 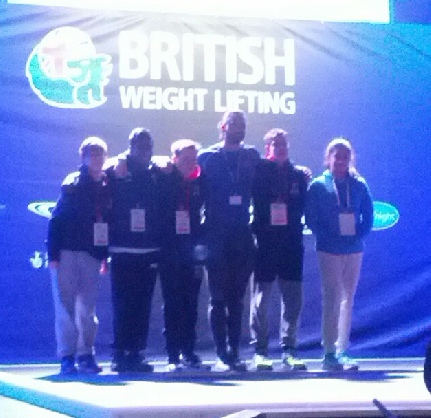